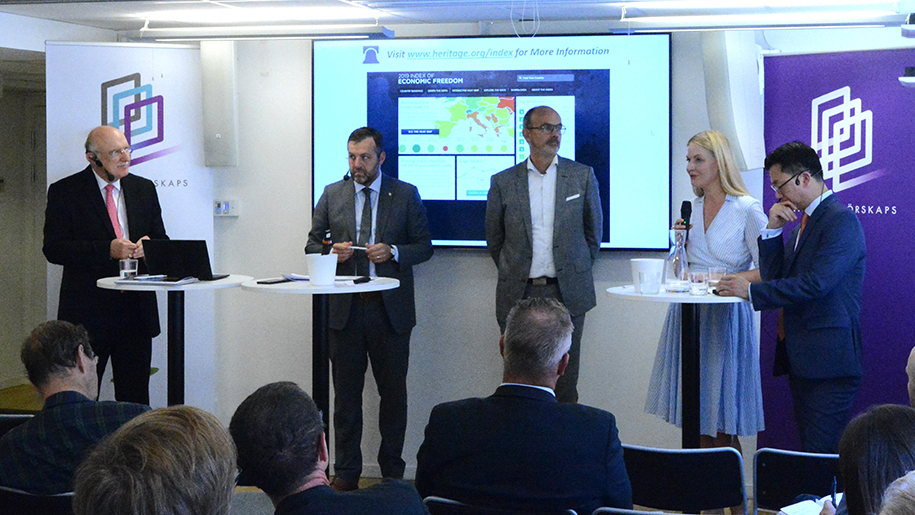 Tuesday 27 August The Heritage Foundation visited Swedish Entrepreneurship Forum to present the twenty-fifth edition of the Index of Economic Freedom, a yearly index that aim to document economic freedom in 186 countries in an attempt to understand the relationship between economic freedom and prosperity. The topics that were discussed at the seminar included the degree of economic freedom in Sweden as well as throughout the world, in order to extrapolate important lessons for Sweden.

Link to Index of Economic Freedom 2019

During the past 25 years the world has witnessed a vast increase in economic freedom, both within Sweden as well as worldwide. Furthermore, Index of Economic Freedom offer a substantial contribution for us to better understand the economic development in Sweden vis-à-vis other countries. 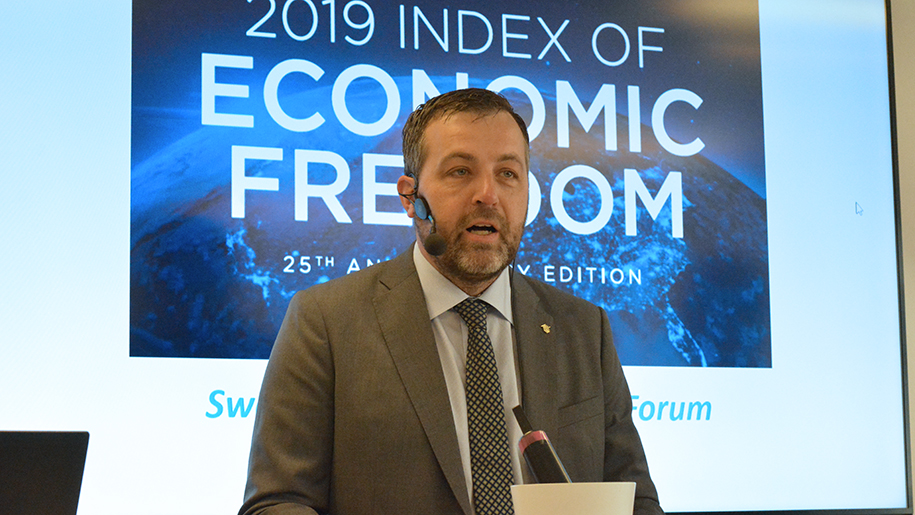 Terry Miller, Director at Centre for International Trade and Economics and Mark A. Kolokotrones Fellow in Economic Freedom, introduced the index by underscoring the strong correlation between economic freedom and success in several other economic areas. Miller added that Sweden positions itself quite well in the index. However, Hong Kong ranks at the top whereas Europe ranks highest out of all the continents.

Sweden is a fascinating illustration of economic freedom. Sweden has a great score, and an interesting story. 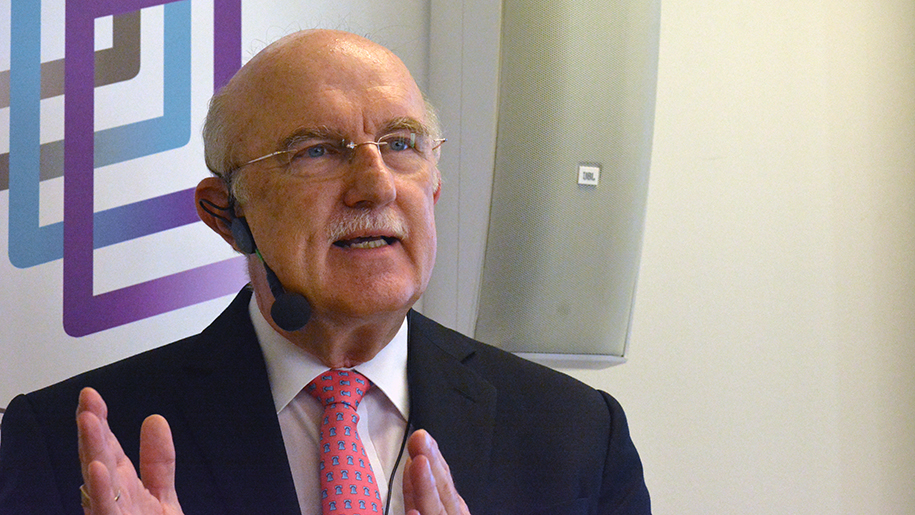 Anthony B. Kim, research manager and editor of the Index of Economic Freedom, began by introducing Sweden’s rank in the index. Sweden score 75.2 out of 100 points which entail an overall rank of 19, and 10 within Europe. Furthermore, Kim highlighted his desire for a dynamic engagement amongst the attendants in order to better understand the empirical context within Sweden. The aforementioned statistics were accompanied by more contextual reflections such as Kim’s view concerning the relatively unique social contract in Sweden whereby all actors seem to recognise the importance of economic freedom and free trade. A quite rare occurrence in other countries, Kim added. Hence, there are a few lessons to be extrapolated from Sweden. Kim ended his presentation by further emphasising his main message, the big picture is very clear: 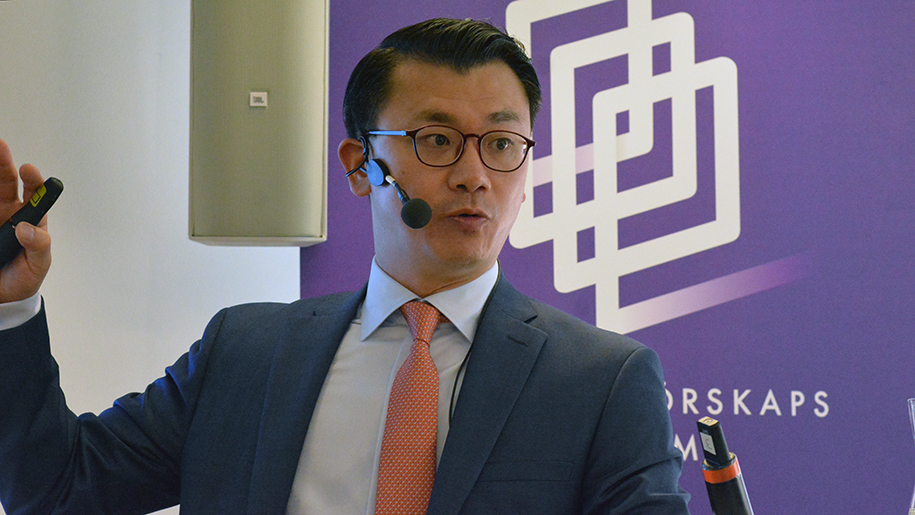 Christian Ketels, chief economist at The Boston Consulting Group, however, contended that certain variables that were included in the index may not necessarily be associated with economic freedom. Furthermore, Ketels reflected upon the complexity concerning certain trade-offs and thereby questioned whether or not these trade-offs could, and perhaps should, have been addressed more clearly in the index. Nonetheless, Ketels remarked that he also recognises this as one of the inherent flaws with these types of indices:

There might be a danger with these types of indices as an index does not necessarily highlight certain inescapable trade-offs inherent in the market, such as sustainability. This poses a dilemma, how should we manage certain trade-offs? 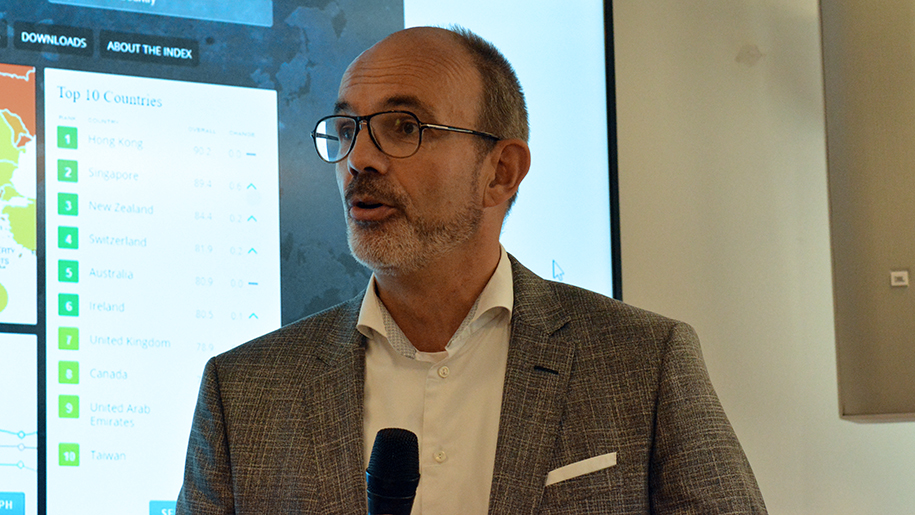 Catarina Kärkkäinen, interning editor at SvD and head of Fria Moderata Studentförbundet, contributed to the discussion by emphasising a predominantly Swedish perspective. She underscored the Swedish decrease in economic growth and reflected upon the political challenges this necessitates. According to Kärkkäinen, Sweden may indeed enjoy a quite high rank in the index, yet the domestic situation this implies is perhaps not as positive as many political actors claim. She asserts that the public sector has grown at the expense of the private sector.

Economic freedom is not merely an abstract concept, it entails healthier and happier lives.